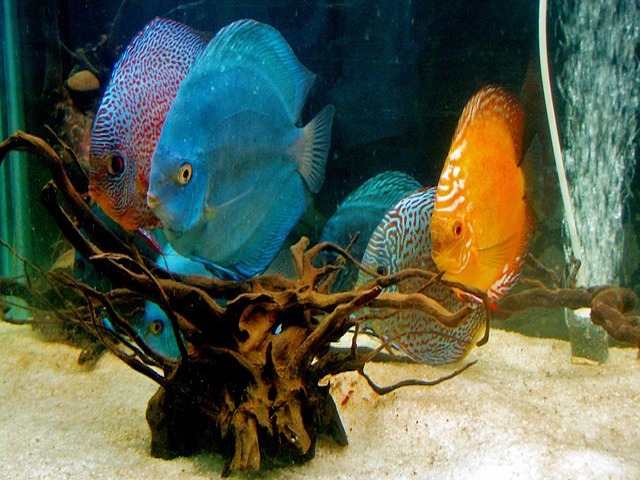 While a majority of pet owners opt for furry friends such as dogs and cats, there is a select group of pet owners who prefer unique pets such as exotic fish. A percentage of those pet owners interested in exotic fish have an interest in building a freshwater aquarium rather than the more expensive saltwater alternative.

Important attributes to consider when you set up your aquarium are the size of the tank, tank stand, gravel or sand as a base, a quality filter, plants or items to decorate your tank, a heater, and a neutralizer to clean tap water of the chlorine. Tap water is the recommended aquarium water of choice for freshwater fish. The size of the tank depends on your budget. A 30-gallon tank is recommended for beginners while a 55-gallon tank is considered ideal.

Once you’ve constructed a home for your freshwater fish, it’s time to select the freshwater species to inhabit your new aquarium! Stocking the correct amount of fish in your aquarium is something of an educated guess. A general rule of thumb to use regarding how many fish to stock is 1″ of fish per 2-5 gallons of water.

As you begin to research freshwater fish, there are some species recommended for beginners or owners with intermediate experience. There are many species to choose from in all shapes, sizes, and colors. Here are five freshwater fish species that are hardy, relatively easy to care for, and peaceful that will make great pets to get you started:

Discus: Discus is a genus of cichlids native to the Amazon river basin in South America. They typically live for ten years, require intermediate-level care, and eat a diet of algae flakes and shrimp pellets. They are called Discus due to their flattened, “disk” shaped body which varies in color and pattern. They require a large tank (75+ gallons) and are considered peaceful. However, it is ideal to keep them with a tank of their own species.

Zebra Pleco: Like the Discus, the Zebra pleco (Zebra Plecostomus) is native to the Amazon river. They have distinctive black and white striping similar to a zebra and typically live for ten years. They are bottom-dweller catfish that like to hide in caves or between rocks, so consider this when designing your tank. They’re a good fish for beginners, are peaceful, and need at least a 30-gallon tank. They feed on live/frozen lobster eggs, prawn, and blood worms.

Rope Fish: Rope Fish are eellike and a smaller version of the Snakehead fish. They typically live for 15-20 years, are peaceful, and are suitable for beginners. Rope Fish have flat heads and a pattern of scales similar to a snake. They require a 50+ gallon tank and, like Zebra pleco fish, like to hide in spots amongst the rocks and plants. They eat live/frozen prawn and mussels.

Chinese Hillstream Loach: These fish are fascinating and entertaining to include in your tank. Native to rivers in China, they dwell at the bottom and feed along the sides of the tank by using unique fins that provide suction as they move around. They typically live 8-10 years and ideally need a 55+ gallon tank. They like to feed on brine shrimp and blood worm. They are black and yellow and are considered a peaceful fish. Due to their cooler water and higher oxygen level needs, they demand an intermediate level of care.

Elephantnose Fish: A unique addition to any tank, Elephantnose fish can live to 7-10 years. They are named Elephantnose due to their trunk-like nose which they use to feed. Native to the Niger River in Africa, they are dark brown or gray with white markings. These fish are considered peaceful but can sometimes be semi-aggressive. They like to dine on blood worms, and brine shrimp and a 50+ gallon tank is optimal. Like the Chinese Hillstream Loach, Elephantnose fish require special tank conditions and an intermediate level of care.